Marine Board's Report: S.S. El Faro, Sinking and Loss of All 33 Aboard 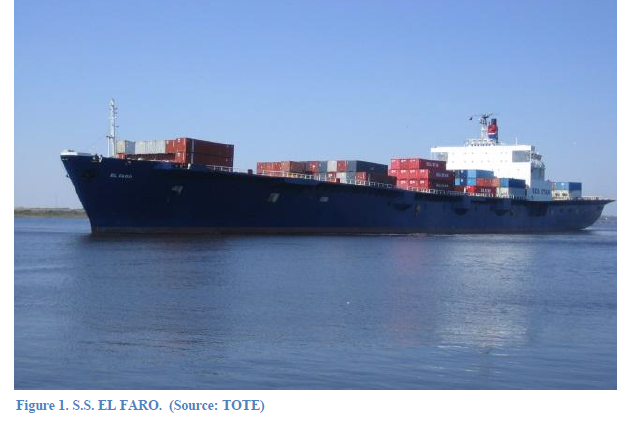 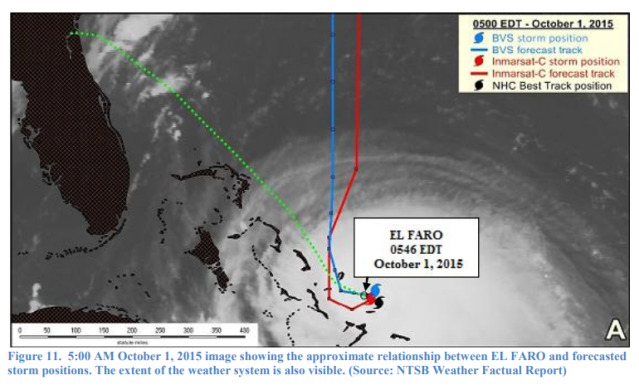 "The Master left the bridge around 8:00 PM. Before leaving, he told the 3/M that he would be awake for the better part of the 3/M’s watch. The Master’s voice was not detected on the bridge again until 4:09 AM the next morning [Oct 1, 2017]"--Marine Board’s Report (pdf) on Steam Ship El Faro (O.N. 561732), Sinking And Loss Of The Vessel with 33 Persons Missing And Presumed Deceased, Northeast Of Acklins And Crooked Island, Bahamas, On October 1, 2015.
Executive Summary (Marine Board's Report):
The loss of the U.S. flagged cargo vessel EL FARO, along with its 33 member crew, ranks as one of the worst maritime disasters in U.S. history, and resulted in the highest death toll from a U.S. commercial vessel sinking in almost 40 years. At the time of the sinking, EL FARO was on a U.S. domestic voyage with a full load of containers and roll-on roll-off cargo bound from Jacksonville, Florida to San Juan, Puerto Rico. As EL FARO departed port on September 29, 2015, a tropical weather system that had formed east of the Bahamas Islands was rapidly intensifying in strength. The storm system evolved into Hurricane Joaquin and defied weather forecasts and standard Atlantic Basin hurricane tracking by traveling southwest. As various weather updates were received onboard EL FARO, the Master directed the ship southward of the direct course to San Juan, which was the normal route. 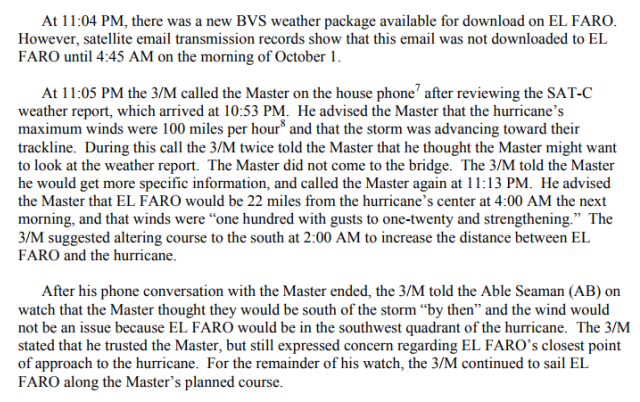 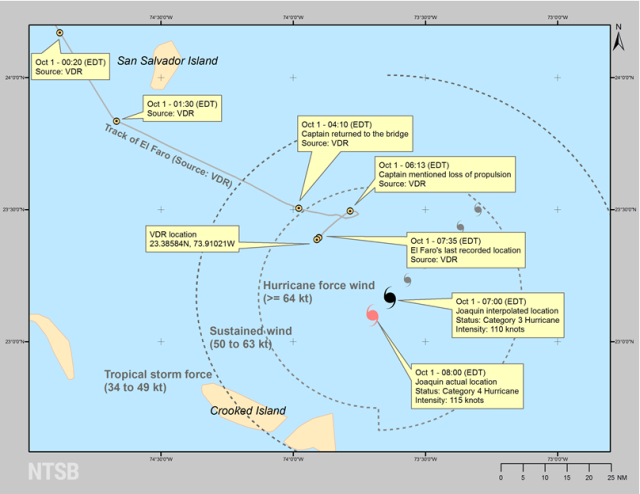 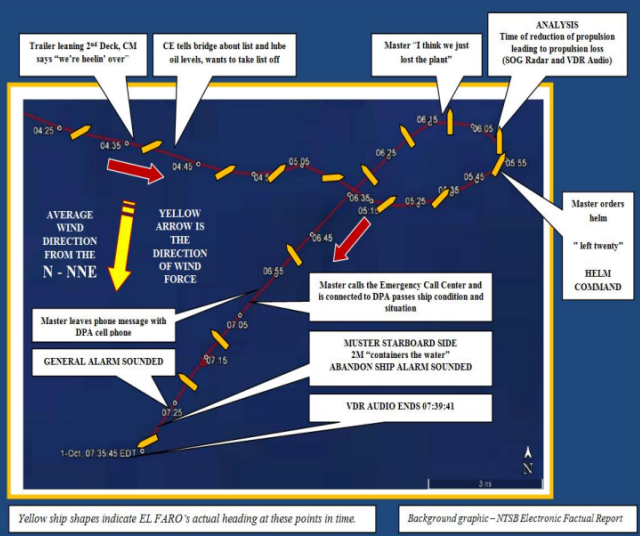 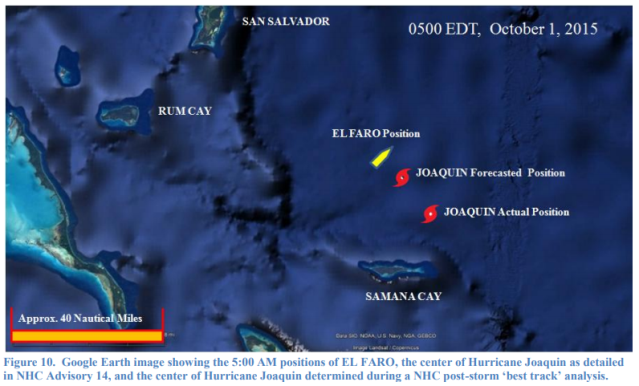 The Master’s southern deviation ultimately steered EL FARO almost directly towards the strengthening hurricane. As EL FARO began to encounter heavy seas and winds associated with the outer bands of Hurricane Joaquin, the vessel sustained a prolonged starboard list and began intermittently taking water into the interior of the ship. Shortly after 5:30 AM on the morning of October 1, 2015, flooding was identified in one of the vessel's large cargo holds. At the same time, EL FARO engineers were struggling to maintain propulsion as the list and motion of the vessel increased. After making a turn to shift the vessel’s list to port, in order to close an open scuttle, EL FARO lost propulsion and began drifting beam to the hurricane force winds and seas. At approximately 7:00 AM, without propulsion and with uncontrolled flooding, the Master notified his company and signaled distress using EL FARO's satellite distress communication system. Shortly after signaling distress, the Master ordered abandon ship. The vessel, at the time, was near the eye of Hurricane Joaquin, which had strengthened to a Category 3 storm. Rescue assets began search operations, and included a U.S. Air National Guard hurricane tracking aircraft overflight of the vessel’s last known position. After hurricane conditions subsided, the Coast Guard commenced additional search operations, with assistance from commercial assets contracted by the vessel’s owner. The search located EL FARO debris and one deceased crewmember. No survivors were located during these search and rescue operations. 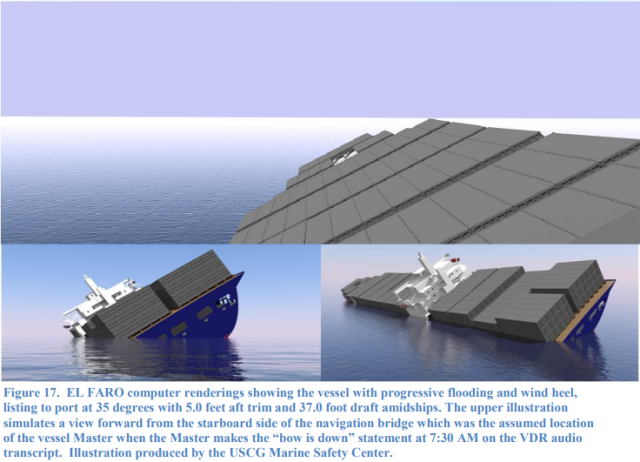 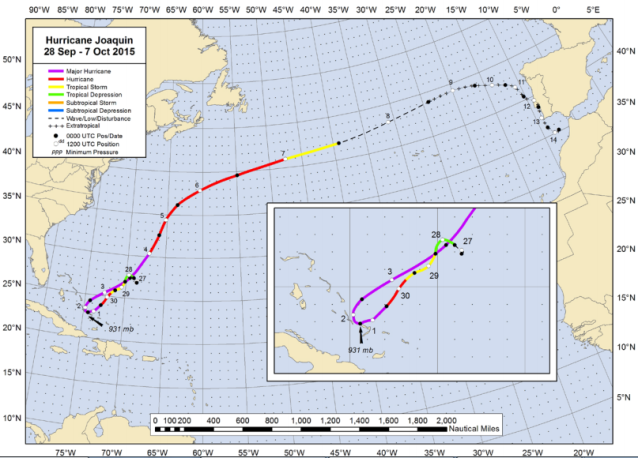