Extreme Sailing Series video published Dec 2, 2018: Watch the video to find out more about the Swiss kings of foiling.

Get ready for a furious fight as the teams take each other down in the grand finale - #extremesailing Los Cabos, presented by Element Sports Group. 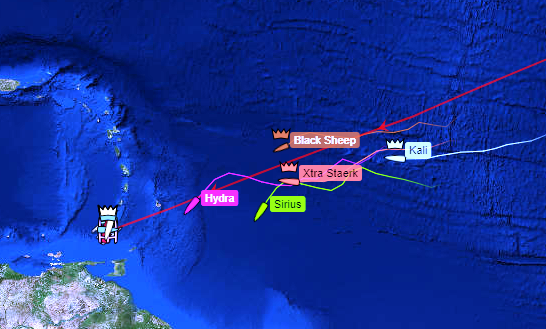 2018 RORC Transatlantic Race Kuka 3 finish video above. Franco Niggeler's Swiss Cookson 50 Kuka3, skippered by Chuny Bermudez, overcame technical issues and a fire on board to post the best IRC corrected time, so far in the RORC Transatlantic Race. After over 12 days of racing in the Atlantic Ocean, the crew looked tired but elated to arribe at Camper and Nicholsons PortLouis Marina.

Kuka3 RORC Transatlantic Race on Thursday 06 December, 2018 at 17:34:35 UTC in an elapsed time of 12 days 5 hrs 34 mins and 35 secs. Kuka3 was the second yacht racing under IRC to finish the race, after Pier Luigi Loro Piana's Supermaxi My Song. Kuka3 has set the best time after IRC correction and is in a very strong position to win the race overall and lift the RORC Transatlantic Race Trophy.

After finishing the RORC Transatlantic Race Kuka3 was safely moored at Camper and Nicholsons Port Louis Marina, where manager Charlotte Bonin and staff cracked open iced cold beers for the Kuka3 team. Chinel Sandy from the Grenada Tourism Board presented Franco Niggeler with
with a basket of Grenadian goods, including chocolate, local spices and condiments. After 12 days of freeze dried cuisine the warm welcome was very much appreciated! RORC Race Officer Steve Cole was on hand to congratulate Kuka3 for finishing the race.

“It was hard especially with the problems at the beginning but it was a beautiful race and we are happy to be here.” commented Kuka3 owner Franco Niggeler.  “The Kuka crew has been fantastic, we have a great leader in Chuny (Bermudez) and he has formed us into a team, we are growing together with his guidance. When things did not go well for us it simply comes down to is simple; you have to fight, try harder and you can overcome the problems. The first beer in Grenada tastes really good especially after drinking warm desalinated water for 12 days.”

“Franco is incredible, he probably was driving the boat more than anyone else for the race, and he is always keen to learn, and that is so important for Franco and for all of the team, especially that he is also very happy.” commented Kuka3 skipper Chuny Bermudez. “It was an interesting race and our first as a team offshore. I was really impressed with the guys, especially as some of them are a bit new to offshore racing. I provide the boundaries and they performed well even when we had our problems. The pitstop in Cape Verde was like a formula one, very fast, just four hours to change batteries and a few cables. Five days before the finish we also had a fire on board, which we dealt with very well, everybody went straight up on deck and we used the correct extinguisher. However we were without communication for days and it was a really big test for us.”

01 Dec 2018: Multihull Line Honours for Maserati Multi 70 - PowerPlay close behind:on 1 December 2018 at 06:54:34 UTC, Giovanni Soldini's Italian Multi 70 Maserati was the first to cross the line in Grenada, taking multihull line honours to finish the 5th edition of the RORC Transatlantic Race. The team completed the 3,000 mile race between Lanzarote and Grenada in an elapsed time of 6 days, 18 hours, 54 minutes and 34 seconds. They were closely followed by Peter Cunningham's MOD70 PowerPlay, who crossed the finish line off Port Louis at 07:40:12, after an Atlantic duel between the two mighty trimarans.

The fifth edition of the RORC Transatlantic Race started on schedule at 1200 UTC on Saturday 24 November. The fleet bid farewell to Marina Lanzarote which had once again provided an ideal location to prepare for the 3,000 nautical mile race to Camper & Nicholsons Port Louis Marina Grenada.

“The fleet got away to a clean start,” commented RORC Deputy Racing Manager, Tim Thubron. “Kuka 3 was first over the line, followed by Class40 Hydra and the two multihulls; PowerPlay and Maserati. My Song held back at the start but was at speed and full upwind mode at the pin, soon leaving the rest of the monohulls in their wind shadow.”

The expected light airs start was enhanced by a sea breeze with many of the teams electing to stay inshore to gain lifting pressure rolling down the volcanic landscape of Lanzarote. Pier Luigi Loro Piana's Supermaxi My Song was the first boat to the turning mark at Puerto Calero Marina, followed by the multihulls.

Peter Cunningham's MOD70 PowerPlay took first blood in the duel with Giovanni Soldini's Maserati Multi 70. PowerPlay led at the turning mark by several boat lengths. Both trimarans were still able to fly a hull in the light pressure, and no doubt the duel across the Canary Islands will be the next phase of the battle to Grenada.

Franco Niggeler's Swiss Cookson 50 Kuka 3 was going well, second on the water in the IRC class behind My Song. Arto Linnervuo's Finnish Xp-44 Xtra Staerk made a cracking start, beating all three Class40s to the turning mark at Puerto Calero.

In the Class40 division, Henrik Bergesen's Norwegian flagged Hydra was first to the mark, just ahead of French skipper Catherine Pourre, racing Eärendil. Stephane Bry's French-Finnish corinthian team racing Sirius was some way behind the leaders, but all set for a 'tick the box' adventure.

Trevor Middleton's British Sun Fast 3600 Black Sheep got away well, the smallest yacht in the race has a crew of five and a massive fan club back home, especially from Yorkshire, Trevor's home county. The amateur crew racing First 47.7 Kali is skippered for the first time by Corinne Wirth. Representing the Swiss Ocean Racing Club, the team are indicative of the ethos of the race. Sail safe and fast!

My Song was making good speed in the light winds leading the monohull fleet, with Kuka 3 six miles astern. Class40s Eärendil and Hydra were side-by-side matched for speed. The entire fleet are heading north above all of the Canary Islands avoiding the wind shadow from the islands. With the ridge of high pressure predicted to provide light winds, the overall strategy for all of the competing yachts will be to stay in the best pressure during the first night.

Finnish Xp-44 Xtra Staerk was still ahead of the Class40s at 1800 UTC and skipper Arto Linnervuo commented from on board;

We had light winds at the start and inshore it was very shifty, so we had to concentrate on keeping the right side of that. We have now seen the wind go to the south and increase a little to about 11 knots. The spirit on board is fantastic and we are so happy to start this race. We are living our dream and we have such interesting boats and sailors to compete with. As the sun goes down, we can feel the chill in the air, but we are dreaming of getting south into warm trade winds and what promises to be fantastic sailing conditions.”

IMOCA 60 leader Briton Alex Thomson got to within 10 miles of Guadeloupe island and went to sleep. His electric probe wake-up watch either didn't fire or he slept through it so he woke up, in a flash, when he hit the rocks. To save his multi-million Euro yacht he started the moter, got off the bricks without too much damage and finished the race.On passing the line the Jury boarded his boat, interviewed him and as a result of starting the motor, they penalized him 24 hours on his elapsed time, which resulted in Thomson finishing 3rd in the IMOCA class. He admitted his mistake widely. An unfortunate incident in his sailing career.--World on Water video above published Nov 17, 2018.

Reliving the race with Alex Thomson

RC44 Class Association video above published Nov 18, 2018: After day one here in Cascais, Nico Poons' Charisma was dead last having posted a 7-8. Even newcomer to the fleet, Paulo Mirpuri and his Mirpuri Foundation, enjoying his first ever day racing in the RC44 fleet, were ahead. A 2-2-6-1 on day two saw the Monaco-based Dutchman's team fight back to fourth place, still nine points from the lead. Yesterday, a welcome continuation of their winning streak saw them win both races in big winds and giant seas, coinciding with a most unfortunate day for day two's leader, Team Nika. This propelled Charisma into the lead. 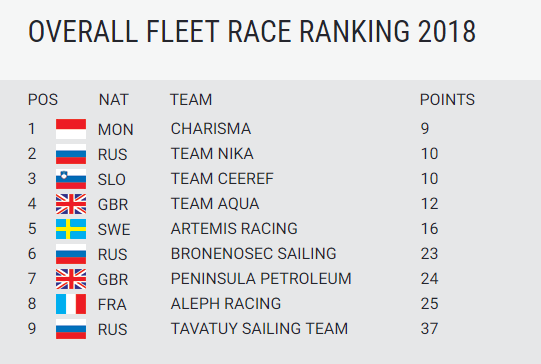 No racing on the final day left Charisma hitting the jackpot, winning the RC44 Cascais Cup, with a three point advantage over Chris Bake's Team Aqua, second on countback to Igor Lah's Team CEEREF. Charisma also overhauled both Team Nika and Team CEEREF to claim the annual RC44 Championship for the first time. The RC44 Cascais Cup is the final event of the 2018 RC44 Championship Tour which pits the world's top businessmen and the best sailors in the industry compete in high-performance one-design 44-foot carbon racing yachts.

RC44 Class Association video above published Nov 17, 2018: The dramatically different conditions on day three of the RC44 Cascais Cup saw some teams come to the fore today, perhaps better suited to the severe conditions, none more so than Nico Poons' Charisma. The Monaco-based Dutchman had won yesterday's final race and continued his winning streak today to claim bullets in both of the two races held. In comparison yesterday's runaway leader, Vladimir Prosikhin's Team Nika, had a day they'd rather forget, posting a disappointing 6-8, the latter following some leeward gate spinnaker trawling. The end result going into the final day of the RC44 Cascais Cup, and of the 2018 season, is that Charisma has streaked into the lead, three points ahead of Chris Bake's Team Aqua.

The RC44 Cascais Cup is the final event of the 2018 RC44 Championship Tour which pits the world's top businessmen and the best sailors in the industry compete in high-performance one-design 44-foot carbon racing yachts.

RC44 Class Association video above published Nov 16, 2018: Beautiful drone shots from day two in Cascais from our team at Icarus Sports shows just how close the racing is for the teams competing in the RC44 final.

The final event of the 2018 RC44 Championship Tour is being hosted in Cascais, Portugal, 14th -18th November, 2018, taking on the oceanic conditions and big breeze that makes this sunny spot in southern Europe a favourite with all of the RC44 teams. Official website: www.rc44.com

Time for the tropics

Route du Rhum - Destination Guadeloupe video above published Nov 13, 2018: Time for the tropics -- As the skippers cross the tropic of cancer, there are plenty of feel good vibes despite lack of sleep and a big battle playing out on the water. See also the other video updates here.