UPDATE Oct 24, 2019: 54 yachts have completed the course, 17 yachts officially retired, 42 are still out on the course. The wind in the Sicily channel finally started abating today and a transition zone is moving eastwards from the western Mediterranean. Later tonight a north-westerly flow will start to dominate.This afternoon, at 16:30 CEST, the Maltese First 45 Elusive 2 was announced as the overall winner of the 2019 Rolex Middle Sea Race. More here. 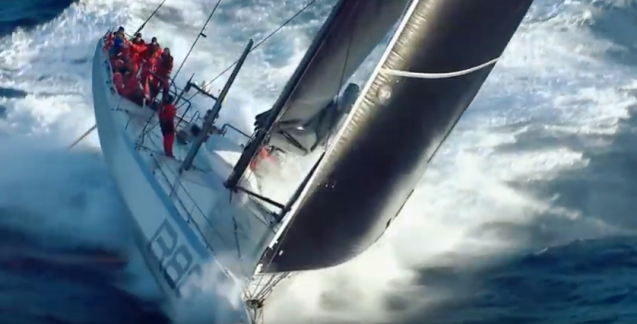 Oct 22, 2019: George David’s American maxi Rambler takes Monohull Line Honours! Rambler crossed the finish line of the 40th edition of the Rolex Middle Sea Race at 08:13:00 CEST on Tuesday, October 22nd, completing the 606nm course in a time of 2 days 19 hours 43 minutes. "Rambler 88" has now taken Line Honours in the Rolex Middle Sea Race five years in a row, a feat unsurpassed in the 50-year history of the race.

UPDATE Oct 23: "The fifth day of the 40th edition of the Rolex Middle Sea Race has been a bountiful one on the docks of the Royal Malta Yacht Club, as yachts start to finish in numbers and tales of the race are shared. The strong winds to the west of Sicily have, as predicted, begun to affect the contest for the overall prize. Rambler’s near 24-hour tenure at the top was ended by Black Pearl’s arrival early this morning. The turnovers then came thick and fast and, at press time, the ClubSwan 42 BeWild is sitting atop the pile. With 84 yachts on the course, including three yet to round Favignana at the halfway point of the racetrack, there is plenty of racing left." More info here.

Oct 21: George David’s American maxi Rambler powers south towards Lampedusa, the only yacht so far to have escaped the clutches of the great Sicilian wind shadow, formed off the northern coast. Rounding Favignana this morning at around 09:30 CEST, the maxi sped to Pantelleria at 15 knots passing the island at 15:10 CEST. Rambler is now marching on to the southernmost corner of the racecourse and is now the overall leader of the race under IRC. Behind Rambler, the competitive juices still flow strong despite the struggle, all competing yachts are through the Strait of Messina and more than half the fleet have rounded Stromboli. LIVE tracker.

The Rolex Middle Sea Race, one of a number of 600 nautical mile bluewater classics Rolex has supported since the early 2000s, celebrates its 40th edition in 2019. Organised by the Royal Malta Yacht Club, the start is set for Saturday 19 October from Valletta’s Grand Harbour. An international fleet in excess of 100 yachts will grace this popular and demanding offshore race which takes in some of the Mediterranean’s most dramatic scenery including two active volcanoes and scores of rugged islands. The quest for overall race victory and the pursuit for line honours are always compelling facets of a race which continues to draw significant participation from both professional and Corinthian crews. Rolex has supported offshore racing for over half a century and its commitment to this element of the sport, through partnerships with races of the calibre of the Rolex Middle Sea Race, is both long-standing and forward-looking.

Rolex is Title Sponsor of 15 major international events – from leading offshore races, such as the annual Rolex Sydney Hobart Yacht Race and the biennial Rolex Fastnet Race, to grand prix competition at the Rolex TP52 World Championship and spectacular gatherings at the Maxi Yacht Rolex Cup and the Rolex Swan Cup. It also supports the exciting new SailGP series, where national teams race in supercharged F50 catamarans on some of the world’s most famous harbours. Rolex’s partnerships with the likes of the Cruising Yacht Club of Australia, Yacht Club Costa Smeralda, Royal Ocean Racing Club, New York Yacht Club and Royal Yacht Squadron are the foundation of its enduring relationship with this dynamic sport.
Tweets by RolexMiddleSea