Hugues Lepic's Aleph Racing scored their third bullet out of four races, increasing their five point lead at the final day's start to a massive 10. Ultimately a fourth place in the final day's second and final race handed the French team victory at the Adris 44Cup Rovinj. This was a considerable step up from their third to last place at the first 44Cup event of the season in Montenegro in April.​ 44Cup video above published Jun 2, 2019.

Day 3 results of the Adris 44Cup Rovinj demonstrated how fortunes between the slippery, high performance RC44 one design monohulls and their ultra-competitive crews can change in a heartbeat. London-based Frenchman Hugues Lepic's Aleph Racing was top scorer in yesterday's three races, just. But today she was runaway leader.

To make up the schedule and because the forecast indicates conditions may be lighter, racing has been rescheduled to start an hour earlier Sunday, June 2, 2019. Meanwhile Saturday night the celebrations continue for the opening of Maistra's Grand Park Hotel Rovinj and the adjacent ACI Marinas Rovinj superyacht marina. See the Adris 44Cup Rovinj video Parade of Sail, a sail past of the Maistra Collection’s brand new Grand Park Hotel Rovinj, host venue for this event.

Glory boys of today were unquestionably Nico Poons’ Charisma, who managed to secure bullets in the first and last races. However these sandwiched a costly last place - the classic zero-to-hero way for which the Monaco-based Dutchman’s team is famous. “This is normal for us - I wish I knew why,” admitted Poons. “We need a bit more time to sail together, but the potential in the team is there. We are getting a more stable and cutting out bad results.” 44Cup video above published May 31, 2019.

A difficult opening day of the Adris 44Cup Rovinj saw just one race completed and a worthy winner in Igor Lah's Team CEEREF. But perhaps never in the history of the 44Cup have so many different teams led during one race. 44Cup video above published May 30, 2019. See also Adris 44Cup Rovinj preview video and video of Tom Slingsby and Vladimir Prosikhin on defending 44Cup World Champion Team Nika for the 2019 season.

The 44Cup fleet returns to the Croatian gem of Rovinj for the second event of the 2019 tour. In the 2019 44Cup, the world's top businessmen and the best sailors in the industry compete in high-performance one-design 44-foot carbon racing yachts. With the team owners at the helm, and the pros calling tactics, the fleet racing is very short, intense and action-packed, with a target race time of 40 minutes and boats frequently separated by just seconds at the finish line. There are generally three to four fleet races a day, depending on weather conditions, and no discard meaning every single race counts. The fleet racing takes place on a windward-leeward course, with a dog leg at the windward mark and a gate at the leeward mark.

Points are allocated on the standard World Sailing ‘low point system’, so the boat that comes first in a race gets one point, second gets two points etc. The team with the fewest points at the end of each event is the winner.

Event schedule:
Tweets by the44cup Venue: Rovinj is situated on the western coast of Istria in Croatia, the largest peninsula on the Adriatic coastline, a one hour drive from Trieste, 2.5 hours from Zagreb and 6 hours from Munich. The people of Rovinj make their living mostly out of tourism, fishing, agriculture, winemaking and viticulture. Boasting a rich natural and cultural heritage with beautiful landmarks such as the old town, the Golden Cape Park Forest, protected islands and coastal area, Rovinj has many loyal visitors from all parts of the globe and has developed into a popular tourist destination. A pleasant climate and a wide array of sports facilities make Rovinj an ideal host venue for competitions, tournaments, sports schools and training camps for professional athletes all year round.

It was the most global Crew Allocation ever, with crew representing 36 of the 44 nationalities taking part in the race turning up at the Portsmouth Guildhall in the UK to find out what team they will be in. There were plenty of surprises and laughs for the more than 400 crew and 200 Race Crew Supporters, but the main feeling of the day was bring on race start.

The Clipper 2019-20 Race will begin at St Katharine Docks, London, on September 1. Around 700 non-professional sailors from all walks of life, who have spent months training and preparing, will take part in the 40,000 nautical mile eleven month ocean adventure that includes six ocean crossings and visits six continents.

The global Clipper Race Route will include stopovers in Punta del Este, Uruguay, Cape Town in South Africa, Fremantle and the Whitsundays in Australia, and Sanya, Zhuhai and Qingdao in China.

2018 was an incredible year for Alex Thomson Racing. Here’s a look back at some of the ‘best bits’.

The World Sailing Show May 2019 Edition


It has taken two years to create and has required absolute secrecy throughout. As Thomas Coville’s new 32m trimaran was rolled out into the open we got to see why his team had been so tight lipped about their new beast of a boat. This is an Ultime like no other.

We also take a look at another high performance multihull, but this one is for cruising. The Eagle 53 was inspired by the America’s Cup and designed to fly.

A new plan for the road to the America’s Cup is laid out as this year’s opening event is postponed.

How a sailing club in San Diego with an unorthodox approach to racing is grabbing the support of a new generation of young sailors. Plus, alternative ways to get your kicks on foils.

Saturday, May 25, 2019:  Harm Müller-Spreer’s Platoon crew clinched the first regatta title of the 2019 52 SUPER SERIES season, winning the Menorca 52 SUPER SERIES Sailing Week by one single point! Second placed Provezza, who led into the last race, missed out on the overall win by just four seconds. 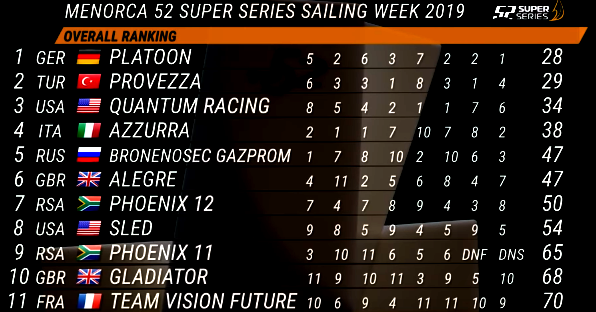 Day 4, May 24, 2019: a long day that finally yielded one race, and Quantum Racing emerged with an increased lead at the top of the leaderboard of the Menorca 52 SUPER SERIES Sailing Week. Final day of racing on Saturday, May 25, 2019.

Go behind the scenes with the ATR team

Alex Thomson and the ATR team deliver their final overseas tour onboard the current HUGO BOSS boat in Cozumel, Mexico.

The Luna Rossa Journey & Quest for the Ultimate Prize (video)

The Luna Rossa Journey & Quest for the Ultimate Prize

Luna Rossa’s quest for the America's Cup began two decades ago. An epic win of the Louis Vuitton Cup in Auckland in 2000, defeating America One, to move on to the America's Cup finals against Team New Zealand was a defining moment for Patrizio Bertelli’s Italian challenge that has endured the test of time and continues their pursuit in the 36th America's Cup presented by Prada.

Produced by award winning producer, Michael Mann and renowned editor, Claire Simpson (Academy Award for Platoon) this film captures the extreme moments on the water, from the America's Cup racing in Auckland to Valencia and on to San Francisco.

In the words of the late Sir Peter Blake: ‘You didn't win…but you only lose if you don’t have the courage to return.” Overcoming disappointing, to challenge again, the film explores the intensity of human resolve that makes the America's Cup the most complex trophy to win. Luna Rossa Challenge video above published May 5, 2019. 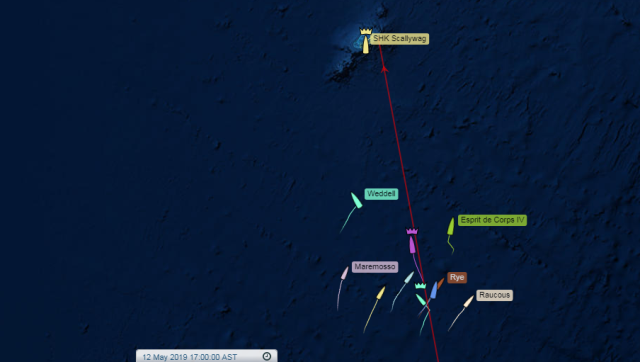 Several yachts are expected to finish the Antigua Bermuda Race over the next 24 hours. At 0900 AST on Sunday 12 May, Afansay Isaev Maxi Weddell (RUS) was 223 miles from the finish line. Gilles Barbot's Volvo 60 Esprit de Corps IV (CAN) are just 14 miles astern of Weddell, 237 miles from the finish.

In the race for the win after IRC time correction, Lombard 46 Pata Negra (GBR), skippered by Andy Liss is estimated to be leading by eight hours, with 261 miles to go. Three yachts are having a very close battle for the podium after time correction. Kevin McLaughlin's x-55 Rye (USA) is 300 miles from the finish and estimated to be second under IRC. Just one hour behind Rye on corrected time is Peter Grueterich's xP-44 Xpatriate (USA), which has 323 mile to go. Morgan Watson and Meg Reilly's Pogo 12.50 Hermes II (CAN) is fourth after IRC time correction, with 304 miles to go and very much challenging for the podium. 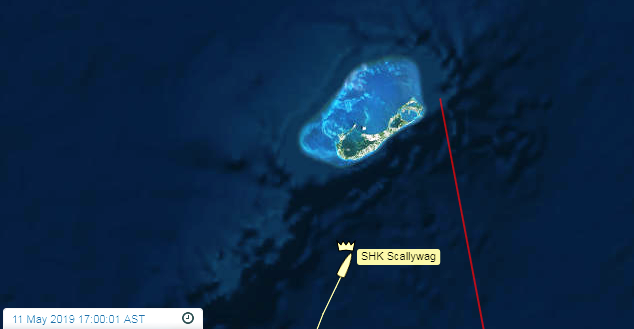 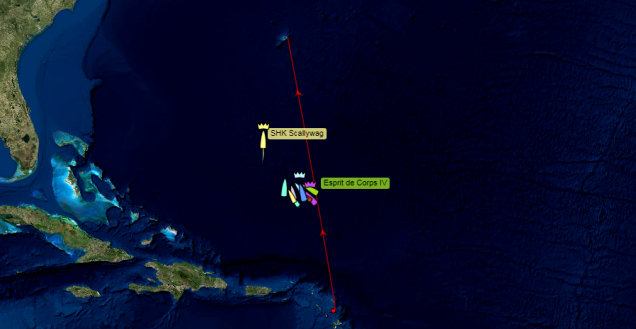 Two months before the start, 20 yachts had expressed their intention to race. The 100ft superyacht SHK Scallywag, will be racing with a full complement of world class sailors. The smallest is the Open 40 Raucous, skippered by Henry Rourke, which will race double-handed. Two of this year's entries have competed in all previous editions of the race. Pogo 12.5 Hermes, co-skippered by Meg Reilly (USA) and Morgen Watson (CAN), and Hanse 43 Avanti, skippered by Jeremi Jablonski (USA), which will be racing double-handed.

"Team Sun Hung Kai/Scallywag's team owner, SH Lee, is very excited to be racing his 100ft' Super Maxi with his team in Antigua for the first time in the upcoming 2019 Antigua Bermuda Race," commented Scallywag skipper Dave Witt (AUS). The 100ft canting keel Scallywag (ex-Ragamuffin) is very capable of breaking the Antigua Bermuda Race record which was set by Stephen Murray, Jr. (USA) racing Volvo 70 Warrior last year (2 days, 18 hours, 32 minutes and 48 seconds). The Antigua Bermuda Race is part of the Atlantic Ocean Race Series (AORS) and is equally weighted with the RORC Caribbean 600, Rolex Fastnet Race, and Rolex Middle Sea Race. Scallywag will be picking up valuable points prior to the start of the main event for the series, the Transatlantic Race, starting June 25, 2019.

The 935-mile Antigua Bermuda Race is organized in association with Antigua Sailing Week and is supported by the Bermuda Tourism Authority. Yachts of 40ft and over will be racing under the IRC Rating Rule, MOCRA and the CSA Racing Rule, with the latter amended to permit boats to use their engines, subject to a time penalty. The Royal Bermuda Yacht Club, with many years experience hosting the Newport Bermuda Race, will guarantee a fantastic welcome and a great party.

SailGP Round 2 in San Francisco -- six national teams racing supercharged foiling catamarans capable of reaching speeds of up to 50 knots (60mph) do battle on San Francisco Bay May 4-5, 2019.