Alinghi, World Champion, with two races to spare--GC32 Racing Tour video above published Jun 30, 2019--Having looked secure, leading by 16 points going into the last day, Ernesto Bertarelli’s Alinghi team, helmed by Arnaud Psarofaghis, scored a 2-1-1 in the first races to win the 2019 GC32 World Championship with two races to spare – an incredible result given the calibre of competition racing here off Lagos, Portugal.

Fighting for the podium positions: Conditions took on a different turn for day three of the GC32 World Championship. While a brisk northwesterly was anticipated, the wind that blew for the majority of the day was southeasterly, backing into the east as the afternoon wore on. This became patchy during the third and what would become the final race of this penultimate day of competition. GC32 Racing Tour video above published Jun 29, 2019. Sunday, Day 4, will be the final day of racing.

GC32 Racing Tour video above published Jun 28, 2019: While four boats were separated by one point as day two dawned, now, at this half way stage of the event, two teams have edged ahead: Leader Alinghi and second placed Oman Air are now separated by just three points, six points ahead of INEOS Rebels UK in third.

Day one of the GC32 World Championship, taking place with the support of the City of Lagos, Marina de Lagos and Sopromar, started in an uncharacteristic southwesterly, blowing across Lagos’ bay and at times gusting to 16-17 knots. Two races were held in this before the lighter prevailing northwesterly filled in, requiring a new race course to be set up and a change from upwind to reaching starts. While the top four teams came out close, all had deep results, the most polarised being those of Alinghi, which ended the day second but tied on points with the leader, Oman Air. GC32 Racing Tour video above published Jun 27, 2019.

Racing off Lagos takes place on the Atlantic, but the waters are protected by Cape St Vincent, the southwestern tip of Europe, just 10 km away. With sea breeze conditions and flat water, the GC32 World Championship should offer perfect foiling conditions.
Tweets by GC32RacingTour

June 21, 2019: It was a wet and wild first day at New York SailGP, which started out with a bang when the Great Britain SailGP Team capsized before racing even began.

Saturday, June 22, 2019: You simply couldn't ask for more from a sporting finale.

Friday, June 21, 2019--The Royal Cup is going down to the wire--the super Saturday showdown!

Four races in each fleet has the 2019 Helly Hansen Chicago NOOD Regatta back on track.

Rolex Giraglia 2019 – One to remember

An enthralling edition of the Rolex Giraglia concluded on Saturday 15 June with the final prizegiving hosted by the Yacht Club de Monaco. Contested by 243 international yachts the 2019 Rolex Giraglia offshore race proved to be one of the fastest in recent memory with all finishers arriving in under 40 hours. Recipients of Rolex timepieces were Alex Schaerer’s Maxi 72 Caol Ila R as the overall winner on corrected time and George David’s 88-ft maxi Rambler having secured line honours. As crews arrived at the resplendent Yacht Club de Monaco, it provided an opportunity to reflect on the race’s enduring and unique appeal. Rolex, a supporter of yachting since the 1950s, has been a close and committed partner of the event since 1998. Rolex World of Yachting video above published Jun 15, 2019.

World Sailing TV video above published Jun 14, 2019: Noé Delpech has been sailing in Marseille since 2005, so he was the perfect person to ask about what we can expect to see here at the venue for sailing at Paris 2024. However, he's currently fully focused on Tokyo 2020, and the fight between the French 49er teams for that solitary spot at the upcoming Olympic Games.

In her first appearance at the Rolex Giraglia, George David’s Rambler claimed line honours completing the 241 nautical mile offshore race in a little over 16 hours. The United States maxi was on course to break the seven-year old race record until the breeze faded on her approach to the finish line off the Yacht Club de Monaco. Rambler’s closest rival on the water was Sir Lindsay Owen-Jones’s Wallycento Magic Carpet Cubed. She finished almost 35 minutes later. With line honours decided, the focus turns to who from the 243-strong international fleet will prevail on corrected time to claim overall victory. The Rolex Giraglia, one of the most important events in the Mediterranean sailing calendar, has been partnered by Rolex since 1998.

The start of the 2019 Rolex Giraglia offshore race was one of the most impressive in recent memory. Sailing under clear blue skies and a favourable, building breeze the 243-strong international fleet offered a sublime spectacle. A testing and tactical 241-nautical race lies ahead including the seminal rounding of the Giraglia rock, the virtual halfway point. For only the second time in its history, the race will finish off the Yacht Club de Monaco in Monte-Carlo. The leading contenders to be first over the line include Sir Lindsay Owen-Jones’s Wallycento Magic Carpet Cubed, a past line honours and overall winner of the event, and George David’s all-conquering 88-ft maxi Rambler. They both have the current race record of 14 hours, 56 minutes in their sights. Partnered by Rolex since 1998, the event is organised by the Yacht Club Italiano and the Société Nautique de Saint-Tropez. Rolex World of Yachting video above published Jun 12, 2019. 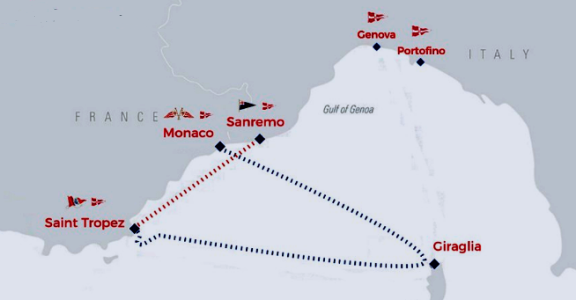 The annual Rolex Giraglia has many facets. Part inshore series, part offshore race, it is organized and supported by distinguished yacht clubs, hosted in enticing locations and defined by a Corinthian spirit and intense, fair-minded competition. Its global standing has increased each year since its founding in 1953, as evidenced by the growth in fleet numbers and international span. The Rolex Giraglia is organised by the Yacht Club Italiano (YCI), supported by the Société Nautique de Saint-Tropez. They are both close partners of Rolex, whose relationship with the event began in 1998. Over 250 crews are expected to contest the 67th edition which takes place from 7–15 June 2019. This year, for only the second time in its history, the Yacht Club de Monaco (YCM) will host the finish of the event’s most famous element, the 241 nautical mile offshore race.

Rolex has always associated with activities driven by passion, excellence, precision and team spirit. It naturally gravitated towards the elite world of yachting six decades ago and today supports the most prestigious clubs, races and regattas. The brand is Title Sponsor of 15 major international events – from leading offshore races, such as the annual Rolex Sydney Hobart Yacht Race and the biennial Rolex Fastnet Race, to grand prix competition at the Rolex TP52 World Championship and spectacular gatherings at the Maxi Yacht Rolex Cup and the Rolex Swan Cup. Rolex’s partnerships with the likes of the Cruising Yacht Club of Australia, Royal Malta Yacht Club, New York Yacht Club and Royal Yacht Squadron are the foundation of its enduring relationship with this dynamic sport.

Onboard with Team CEEREF as they lead the fleet around the windward mark, Adris 44Cup Rovinj, June 1, 2019.

The last Medal Race of the Hempel World Cup Series Final in Marseille was certainly the most tense! Wearing the yellow bibs, Great Britain's Hannah Mills & Eilidh McIntyre led French duo Camille Lecointre & Aloise Retornaz by a single point. With neither able to be caught, it was a straight match race between the two for gold. In light winds and tricky conditions. World Sailing TV videos (above and below) published June 10, 2019.

On a final day plagued by light winds, the 470 Men's Medal Race at the Hempel World Cup Series Final in Marseille was able to be sailed after several failed attempts. Australia's Mat Belcher and Will Ryan had gold more or less in the bag, but who would take silver and bronze?

The first Medal Races at the 2019 Hempel World Cup Series Final in Marseille are set to get underway on Saturday 8th June. Scheduled to be racing on Saturday: RS:X Men, RS:X Women, Nacra 17, 49er, 49erFX and Mixed Kiteboarding

Hundreds of sailors will take to the 2024 Olympic waters for the Hempel World Cup Series Final in Marseille, France. Racing starts June 4 with finals June 8-9.