UPDATE June 12: Emirates Team New Zealand is the winner of the Louis Vuitton America's Cup Challenger Playoffs, winning the first race on Monday and accumulating a total of 5 points to defeat Artemis Racing. 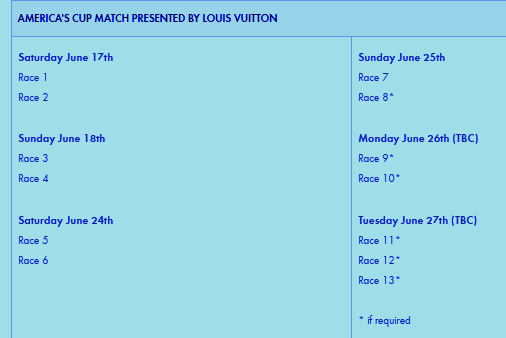 First team to win 7 races will be the new Defender of the America's Cup. The schedule from now thru June 16th: 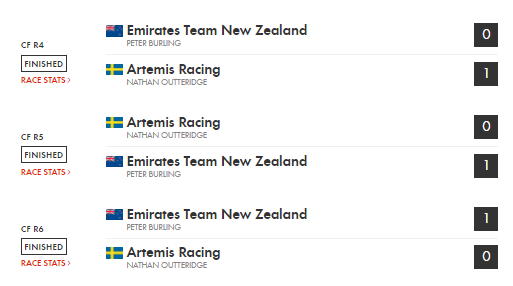 Sunday June 11 was another day of super close racing between Artemis Racing and Emirates Team New Zealand including a photo finish in the final race of the day, giving Emirates Team NZ a 4-2 lead in the Challenger playoffs series. Sunday results and Monday schedule below (after LIVE Twitter Feeds of ).

Jun 10, 2017: Incredibly close racing between Artemis Racing and Emirates Team New Zealand on the first day of the Louis Vuitton America's Cup Challenger Playoffs Final in Bermuda. Advantage goes to the Kiwis, but if skipper Nathan Outteridge hadn't gone for a swim in the final race the outcome could have been very different.

Louis Vuitton America’s Cup Challenger Playoffs, Saturday June 10, 2017: Man overboard! Nathan Outteridge, the skipper of Artemis Racing, slid off the back of the Swedish challenger Artemis Racing at a critical point in the third race of the day, handing the lead to Peter Burling’s Emirates Team New Zealand squad on day one of the finals.

The @artemisracing rollercoaster keeps on picking up speed, as Nathan goes for a swim pic.twitter.com/5n9OWT3OwT
— America's Cup (@americascup) June 10, 2017