Note to readers: this page will be updated regularly through the New Year's Holiday (from December 30 through January 2) with videos and LIVE twitter feed (below) as Alex Thomson on HUGO BOSS (without starboard foil) and Armel Le Cleac'h on BANQUE POPULAIRE VIII engage in an epic struggle for first place at the front of the Vendée Globe fleet, moving north in the Atlantic Ocean.

Video above published Dec 31, 2016: After a successful repair job onboard HUGO BOSS, Alex Thompson can now get some sleep, he'll need the rest for the upcoming passage through the doldrums and to keep making gains on Armel Le Cleac'h on BANQUE POPULAIRE VIII. 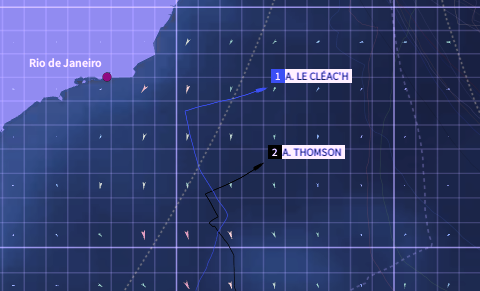 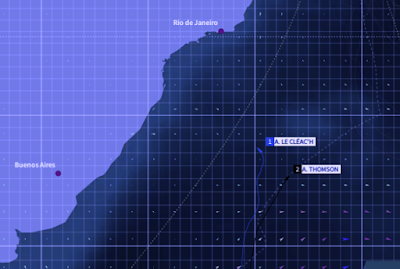 Vendee Globe Update Dec 29, 2016: In the Vendee Globe 2016-17 solo non-stop round-the-world sailing race, Alex Thomson on HUGO BOSS (2nd) made an unbelievable comeback to close within miles of Armel Le Cleac'h on BANQUE POPULAIRE VIII in first--less than 75 nautical miles separated the two as of Dec. 29 at 18h in the South Atlantic (see graphic above) and less than 35 nautical miles later at 22h.