News - Vendée Globe 2016-2017: "The disturbed weather system off New Zealand is dropping down so quickly towards the Antarctic that Armel Le Cléac’h has had to rejig his gameplan. He’s now set to pass to the North of this low pressure centre and will lose the bulk of his lead over Alex Thomson. For a second time, the two leaders are set to endure 36 lively hours, whilst their pursuers will have a calmer transition into the Pacific…" (more at link above)

Alinghi is overall champion of the Extreme Sailing Series 2016: 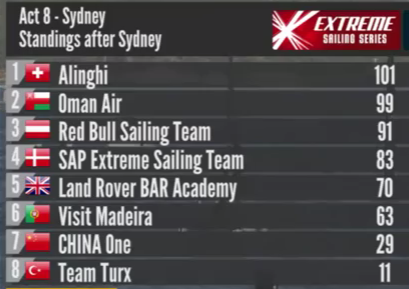 Kings of cool Alinghi win Sydney finale to secure third Extreme Sailing Series™ title | News: "Swiss team Alinghi were crowned 2016 Extreme Sailing Series™ champions today after an epic final-day shoot-out at the season finale in Sydney. In a nail-biting showdown that went right down to the wire, Arnaud Psarofaghis’ men saw off a last-ditch attempt from arch rivals Oman Air to complete their ascendancy to the top of the 2016 rankings. It’s the third time Alinghi have won the Extreme Sailing Series following victories in 2008 and 2014 but the first time they’ve done so ‘flying’ on the new lightning fast GC32 catamarans ...." more at link above and Extreme Sailing Series 2016, Sydney, Australia, Dec 8-11, LIVE Video.